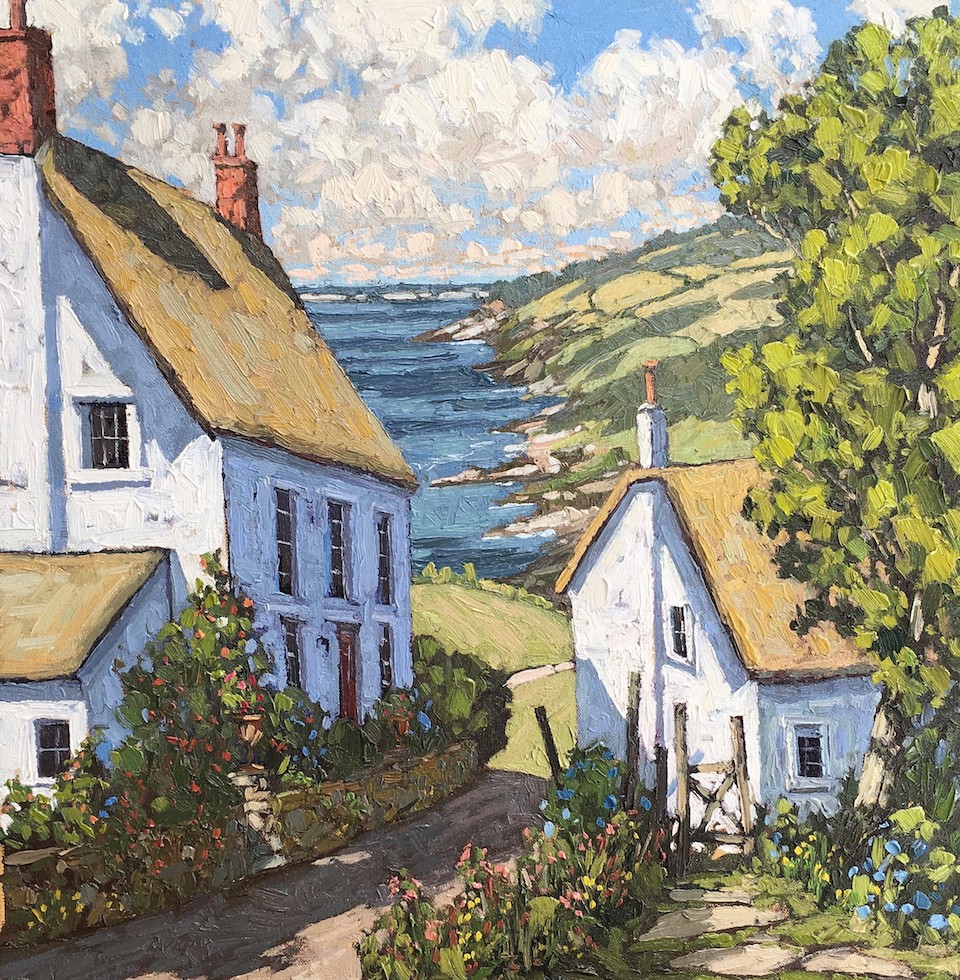 A collector reached out to Gregory James Gallery owner Greg Mullen this spring with a request for a commission that had a twist.

“One of my favorite artists is Walter Schofield (deceased) and Jim Laurino’s work is in some ways similar, and in some ways unique,” the collector wrote in inquiring if Laurino, who exhibits in the gallery, would paint an interpretation of a Cornish harbor scene with seaside houses and mossy rocks.

Mullen reached out to Laurino and he was game.

“The painting parameters were loose enough; a medium sized painting of Cornish architecture, inspired by paintings executed by the late Walter Elmer Schofield (1866 – 1944),” the artist wrote in a piece about his experience for the Lyme Art Association newsletter.

It was up to Laurino to come up with the composition, which was a fun challenge given that he prefers to paint from life and there wasn’t a budget to travel to England.

Schofield’s paintings of Cornwall were instructive, but the artist needed the equivalent of first-hand reference material to develop his own perspective on an authentic setting.

So he “drove” to the Cornwall coast by using Google Maps and its street view photos feature to see actual places and scenes to inspire his composition.

Once he found a scene he liked, Laurino did a sketch and a 10 x 10 study, got the go-ahead from the patron, and then translated his preparatory works into an 18 x 18 painting, “Cornwall Seascape.”

The collector’s perception that there was resonance between the work of Schofield and Laurino is apt.

A major figure among American Impressionists, Schofield came from a prominent Philadelphia family that had emigrated from England. After studying at the Pennsylvania Academy of Fine Art, he traveled to Europe, married an Englishwoman in 1896, and the worked in the Cornwall region. The Williams College Museum of Art, in writing about its Schofield painting, “Frosty Morning,” says, “Schofield invites the viewer right into the picture” and credits his “sketchy brushwork and vivid palette” for making the artist’s works strong examples of American Impressionism.

Laurino, who lives in Litchfield and paints both in the studio and en plein air, favors a bold style for his evocative landscape paintings that appear faithfully representational at a distance and painterly masterful close-up.

Gregory James Gallery says Laurino’s “robust brushstrokes form a meditative exaltation of form and texture, with individual brushstrokes pushed toward abstraction before coalescing as a suite to masterfully depict the transformative effect of light on landscapes and seascapes.”

Laurino dropped off a new selection of paintings at the gallery this spring, and now he’s preparing for the spring and summer season of plein air events, including Plein Air New Bern in North Carolina, and Plein Air Easton in Maryland in July.

For more information on Laurino’s painting and pricing, or to discuss commissions, call gallery owner Greg Mullen at (860) 354-3436.