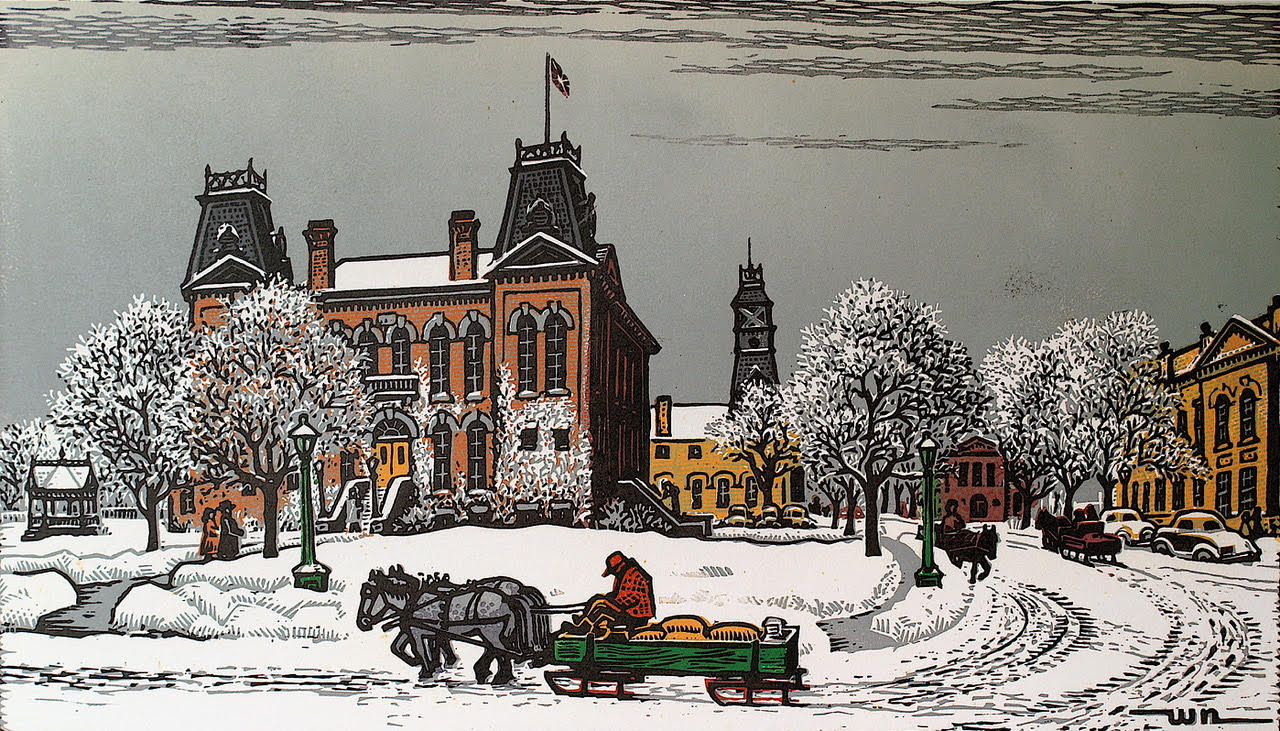 See the Ontario Linocuts on the Neufeld Page

“Neufeld (1909–2002) emigrated with his Mennonite parents from Ukraine to Canada in 1924. By the late 1920s, he had begun his lifelong project as documentarist, responding especially to the built environment, whether close to his home in southern Ontario or farther afield: northern Ontario, the prairies and the west coast, the Maritimes and Quebec. His work passed through a number of styles, from the coolly abstract to the vividly ‘realistic.’ Although he never abandoned oils, he produced a substantial body of watercolours and block prints—the latter influenced by German Expressionist and Japanese printmaking approaches,” according to the book Woldemar Neufeld’s Canada.

Woldemar Neufeld’s Canada provides a record of Neufeld’s Canadian paintings and block prints, and explores influences that shaped Neufeld’s career as it developed in Canada during the 1920s and 1930s and came to fruition from 1940s to the 1990s. “Early on, Neufeld came into contact with leading Canadian artists, from Homer Watson to members of the Group of Seven. During the 1930s, he began to participate in group and solo exhibitions, including a one-man show at the Vancouver Art Gallery,” the book recounts. “After studies in Cleveland, he settled in New York City (1945) and New England (1949). Until the 1990s, however, he continued to work in Canada, returning especially to document, in various media, urban and rural landscapes in southern Ontario.”

After Neufeld arrived in Waterloo, Ontario, at age 15, he attended night school at the Ontario College of Art, according to the Wilfrid Laurier University Permanent Art Collection in Ontario, which has approximately 400 pieces by Neufeld. The museum’s bio of Neufeld said he also enrolled at Waterloo College (now Wilfrid Laurier University) and studied art, graduating in 1930. 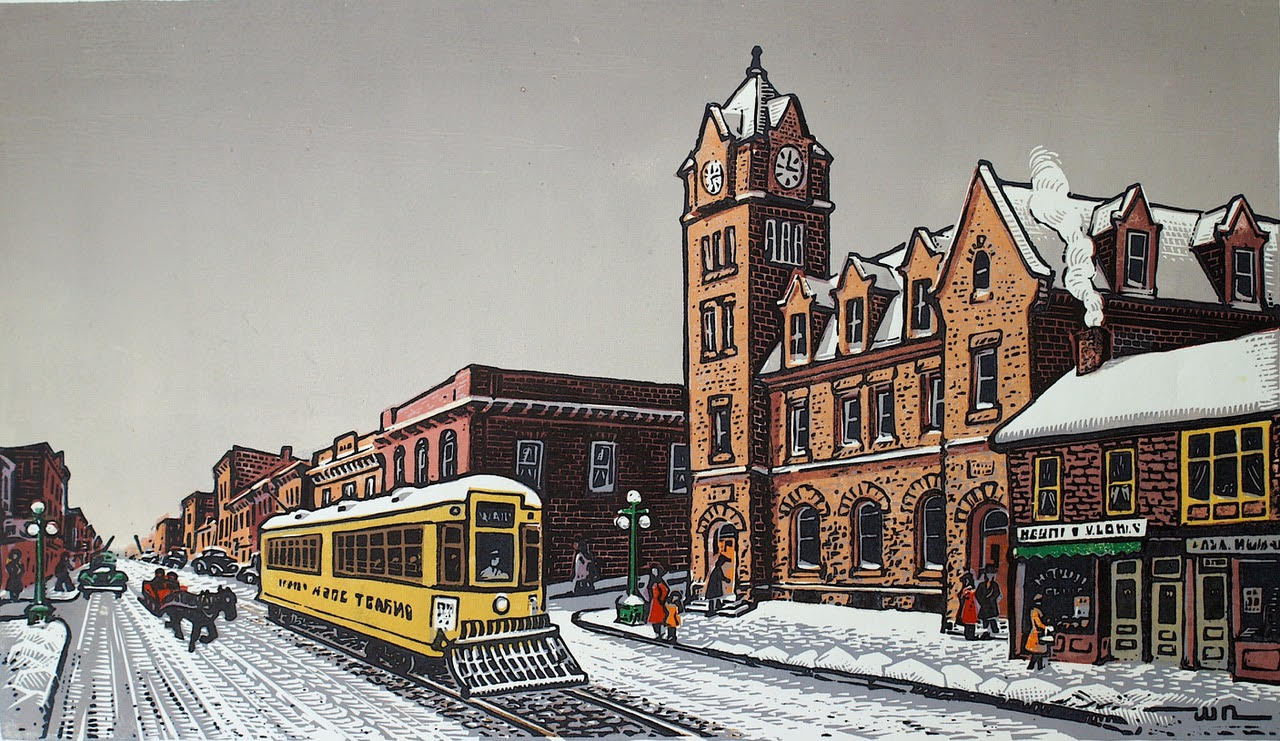 A tram on King Street North in Waterloo with the Waterloo Post Office to the right.

He then worked as an artist in Waterloo, Toronto and Vancouver, the museum bio explains, and on a visit to see his sister in the U.S., Neufeld enrolled in the Art Institute in Cleveland, Ohio. In 1945, he moved to New York City and established a studio on the Upper East Side

Neufeld came to New Milford, Conn., in 1949 and established a studio, gallery, and summer art school in a 140-year-old stone house on New Preston Hill Road in the Merryall section of New Milford. He maintained his studio in New York for some time, but called New Milford home. Neufeld died on Nov. 24, 2002, from complications of Parkinson’s disease.

Gregory James Gallery has an extensive collection of original works by Neufeld, including watercolors and linocuts of New Milford, New Preston, and Washington, as well as Watch Hill, R.I., where he brought his family every August.

Contact gallery owner Gregory James Mullen for details and pricing at 860-354-3436 or by email at GregoryJamesG@aol.com, or visit the gallery to see the Neufeld collection. 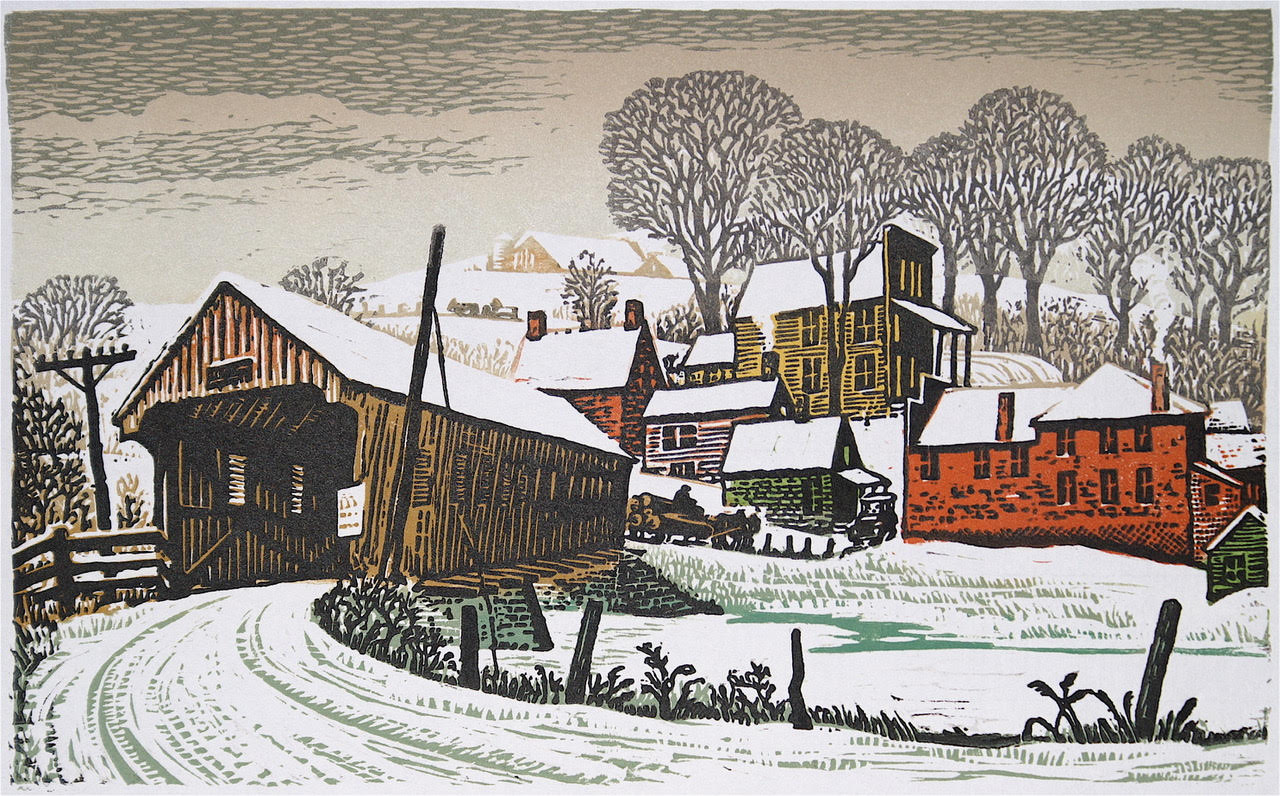